Everybody knows master Xico Tarefa in Redondo. At the age of 69, Francisco do Rosado still spins his wheel and talks about his art with the same passion. His pottery workshop, in the town centre, is one of the most renowned and sought-after among those who visit this part of Alentejo.

His generosity is as great as the talent we discovered when we paid him a visit. And this master is not only an expert at working clay, he’s also an irresistible storyteller. And his story is the best story. We had the privilege of hearing him talk about his childhood surrounded by clay, how he became one of the best at his craft and spread his art all over the world. 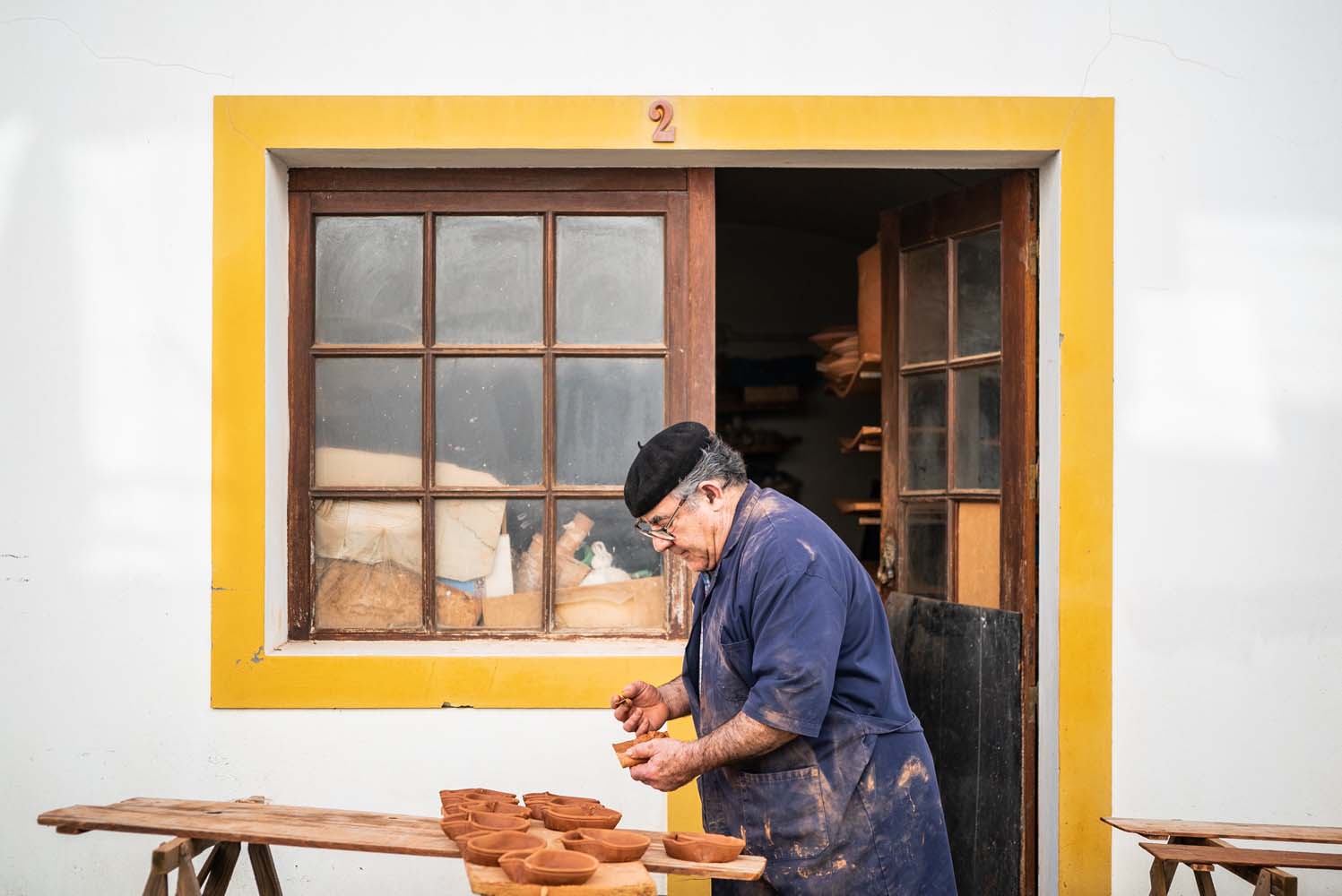 “In those days, Redondo was a pottery town. There were about 30 workshops, which is why this ended up being the most popular trade. I lived beside a workshop and spent lots of time there playing with clay, and the craft grew on me”.

The workshop where he grew up was one of the biggest in Redondo. There he discovered this art and met the master who taught him everything and gave him the space he needed to be creative. After hours of work, he would stay late and experiment with new pieces. “During the day I followed my master’s orders and at night I did what I wanted. Fortunately, I had a great master who taught me how to do everything. Not everyone learned to carve and paint, since this task was done by women, but I was lucky to learn. I became a master at the age of 16”.

After completing his military service, he went home and started to work with children in town. In a recreation centre, he taught pottery and helped preserve his craft. When he retired, he set up his own workshop and began a new stage in his journey.

His identity as an artisan has always been associated with Redondo pottery. The main trait of this specific type of pottery is the three-coloured design (yellow, green and brown), as well as the technique used, where the clay is first sgraffito-ed and then painted. The designs are also very characteristic, typically displaying birds, chickens and flowers. 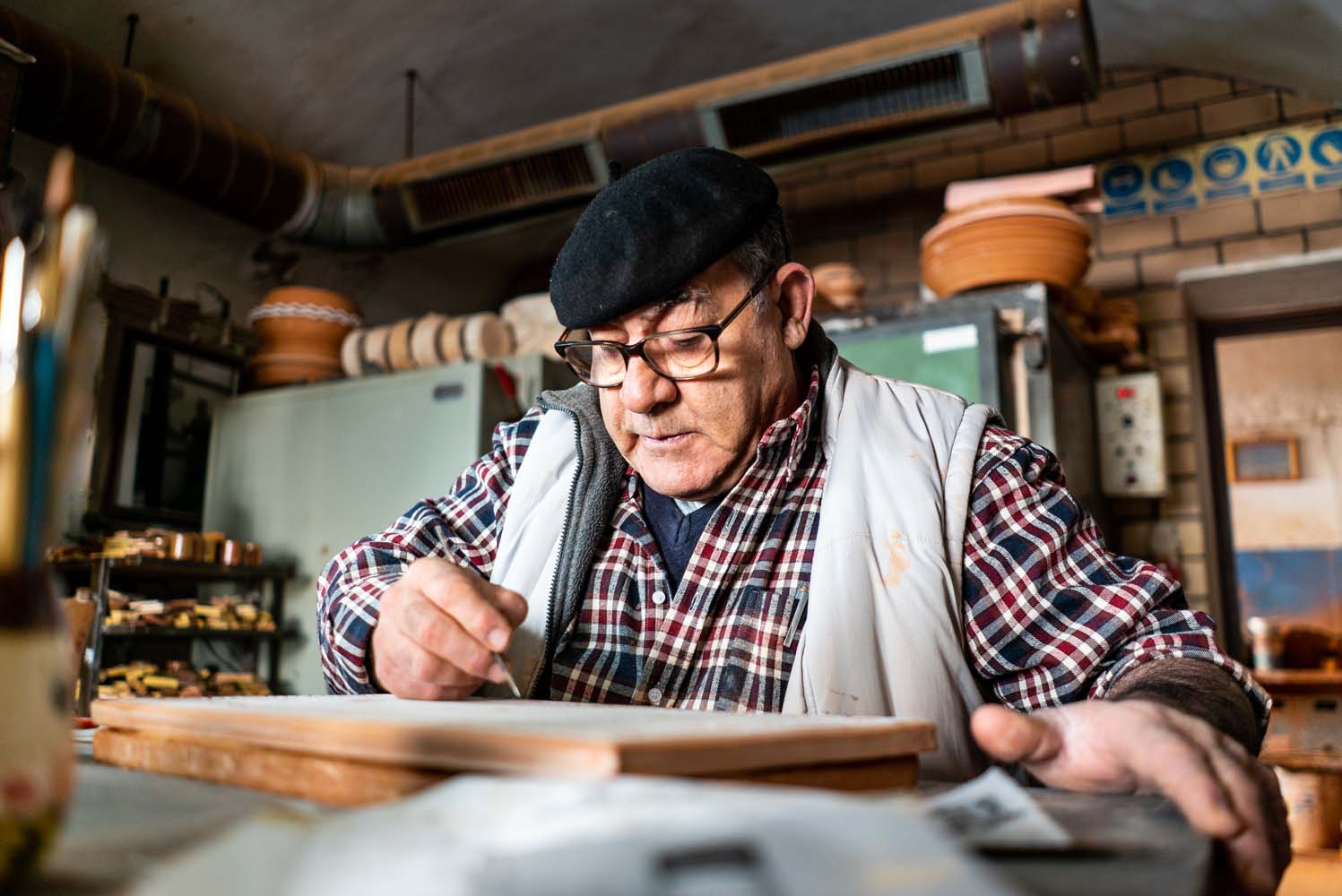 «Over time I searched for new approaches. Like this project with Esporão, which I immediately considered a challenge. It was something new, which would take time and creativity. It couldn’t be rushed”.

When we enter his workshop, we realise that the whole atmosphere brings time to a standstill. Although we’re at the heart of town, the room is silent. There are no distractions and it’s easy to lose track of time. No radio, no television, not even clocks. The brown hues and low natural light give a false sense of time passing.

The worktable is organised in its own way – everything’s at hand, with the high stool in the right position. Before getting to work, master Xico turns on the small lamp and points it to the centre of the table. And the ritual begins. Years of dedication have brought practise and his hands no longer need to be guided.

Before reaching this plaque, master Xico tried other techniques and methods, like prototypes of glass wine bottles in different coloured clay. His perfectionism and constant dissatisfaction led him to try again. That was when he thought it made sense to do something based on sgraffito – a technique that involves drawing with a pointed object on a clay piece painted white. 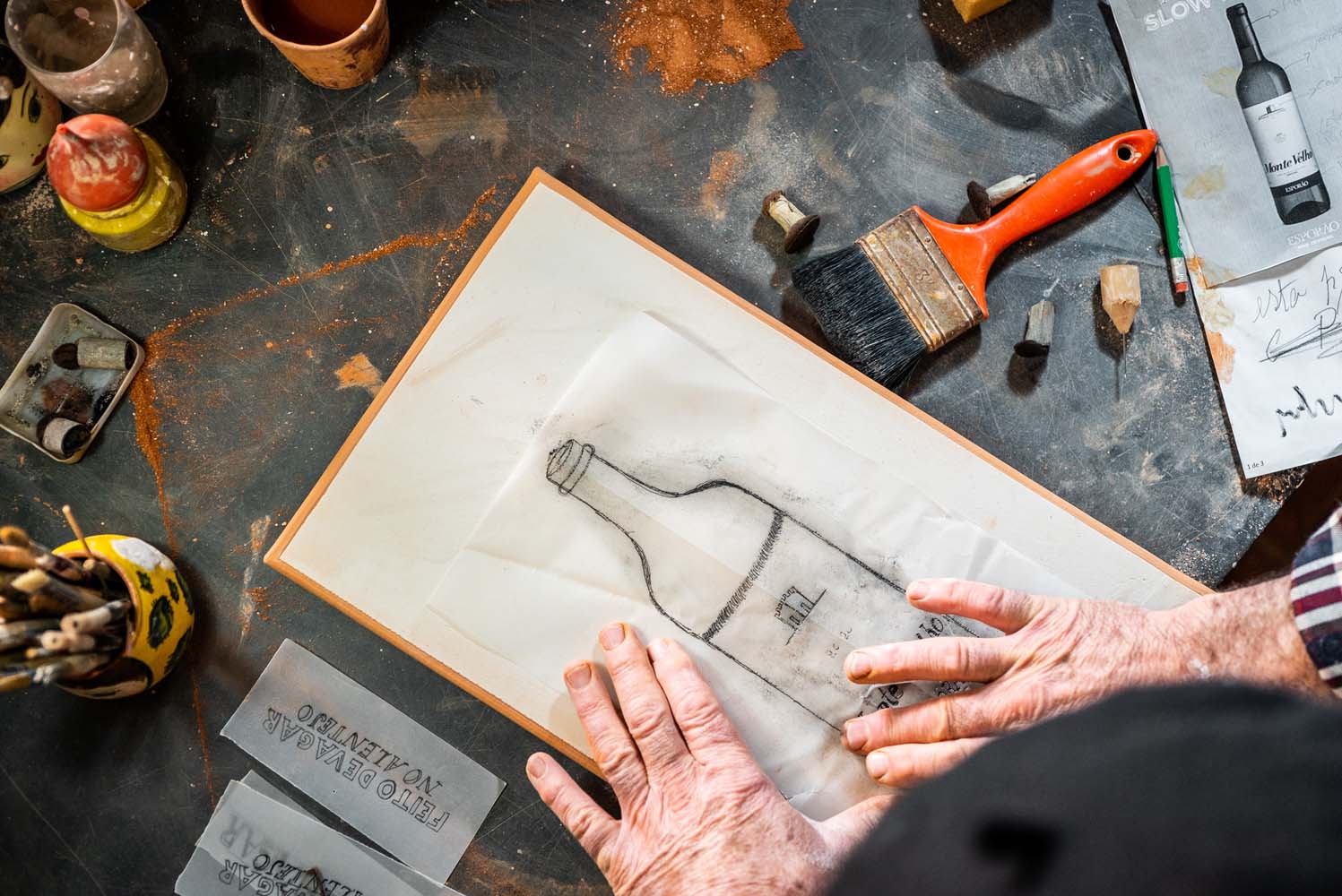 Once the clay plaque is made, it is coated in white paint. When the piece has dried and the sketch of the design is complete, comes the moment of greatest concentration and attention to detail. The silence is now interrupted by the sound of the materials – the charcoal scratching the tracing paper, the paintbrush dipped in paint or the pencil etching the white clay. “It takes a steady hand” states the master as he paints the letters, following the lines. 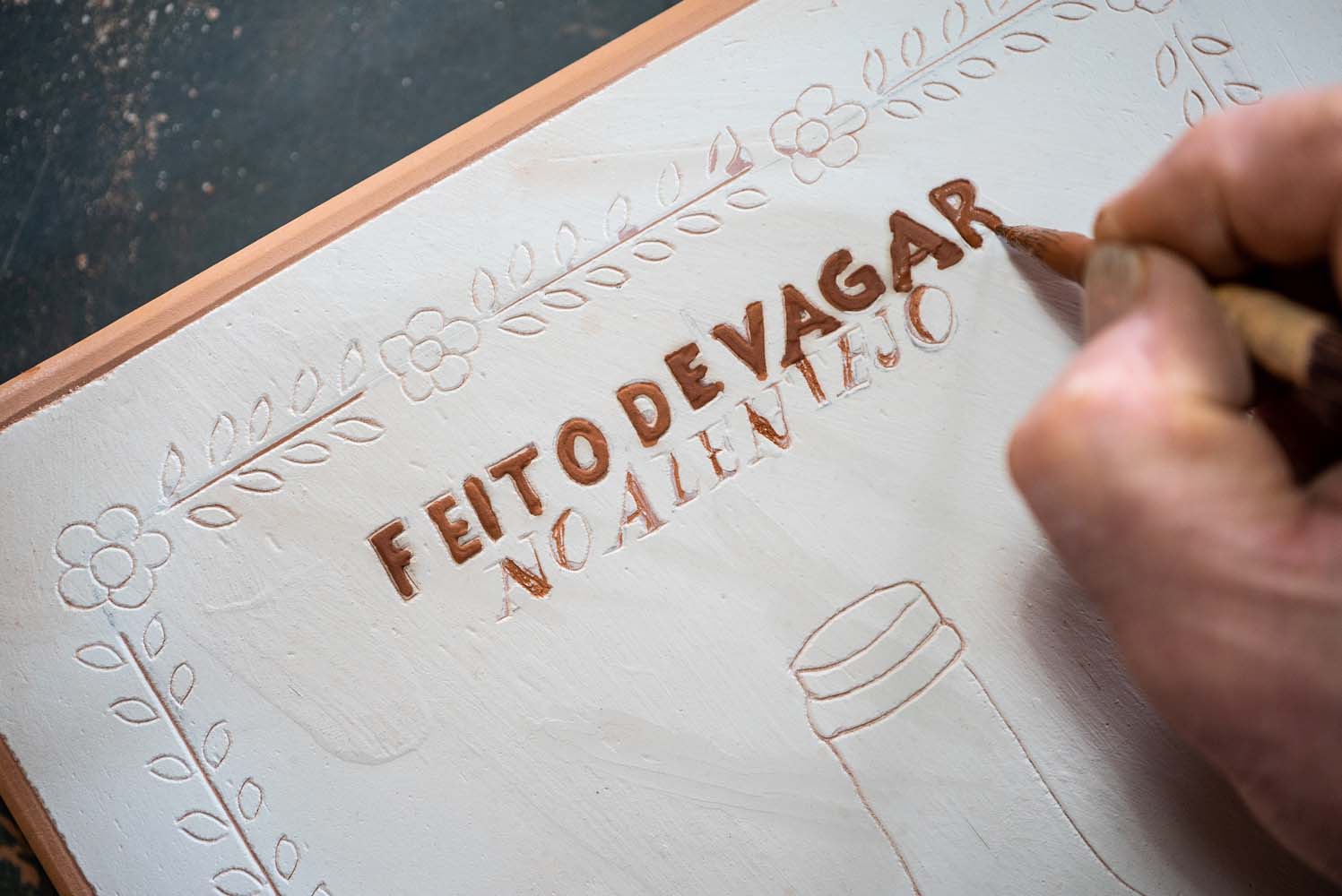 After the sgraffito technique, drying follows. In pottery, pieces must lose 80% of their humidity before drying in the sun – to avoid the risk of breakage. Afterwards, they are fired in the kiln for about seven hours, and it takes twice as long for them to cool. After being fired, they are glazed and then go back in the kiln for six hours.

Finally, the end result appears. The magic of this whole process was also in its uncertainty. Over time, we gained perspective of the piece, understanding it and making decisions at the right time. “We aren’t always handling the piece. We must know how to wait before taking the next step. Since this piece was being produced for the first time and by hand, each step was a surprise. Throughout the process, we made improvements here and there. I think it’s exceptional and true to its motto “Crafted slowly in Alentejo”. But, of course, I’m biased”. 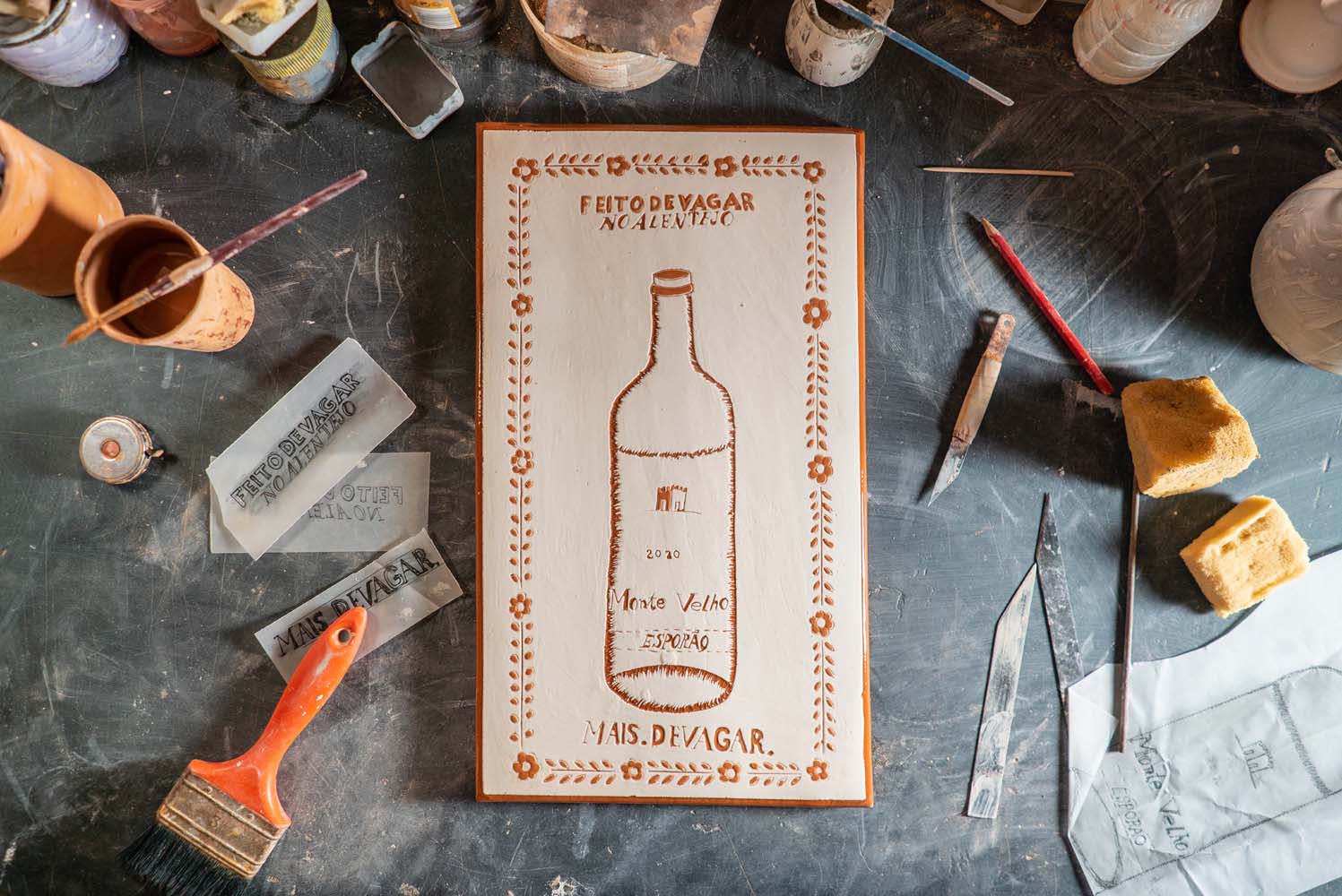 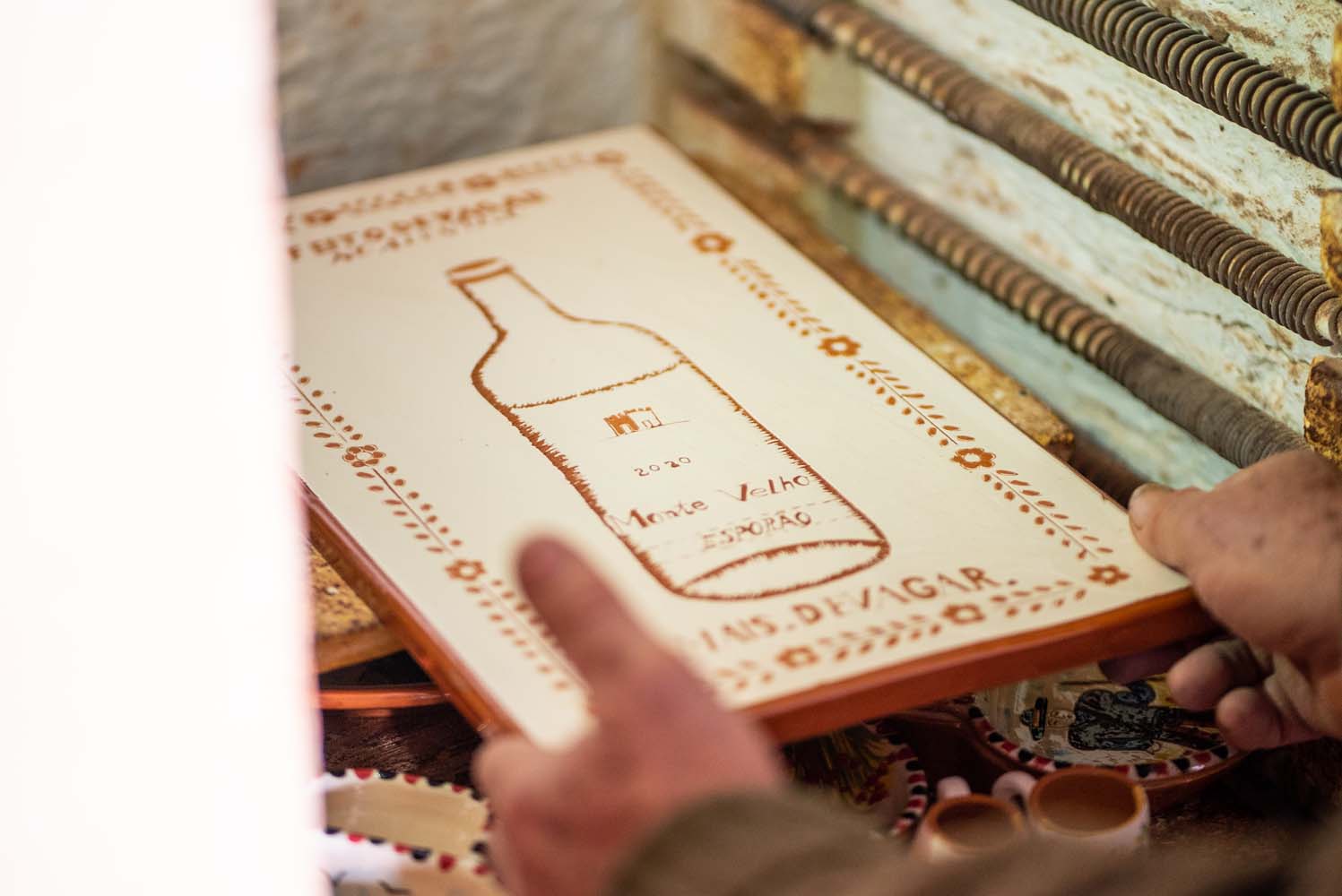 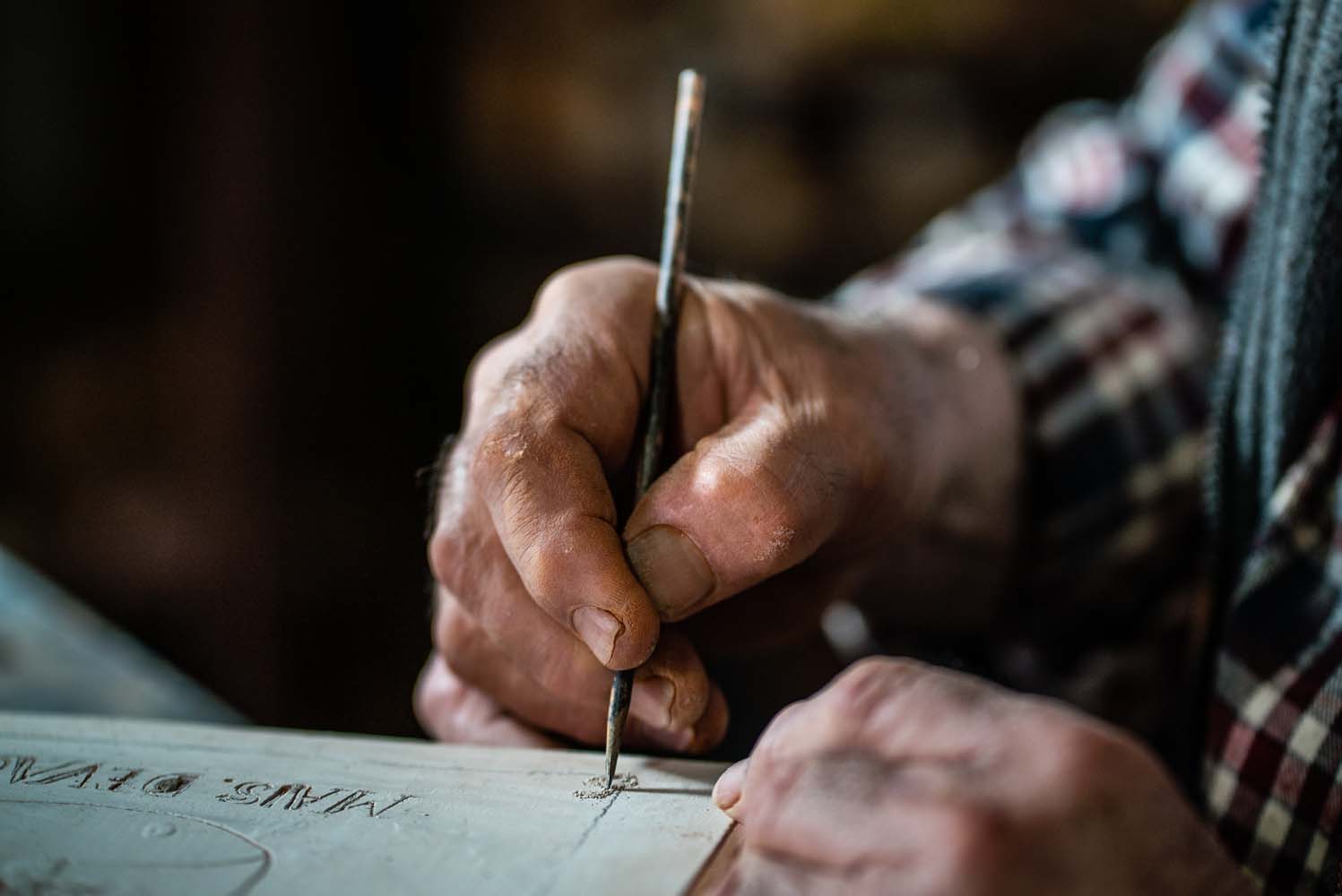 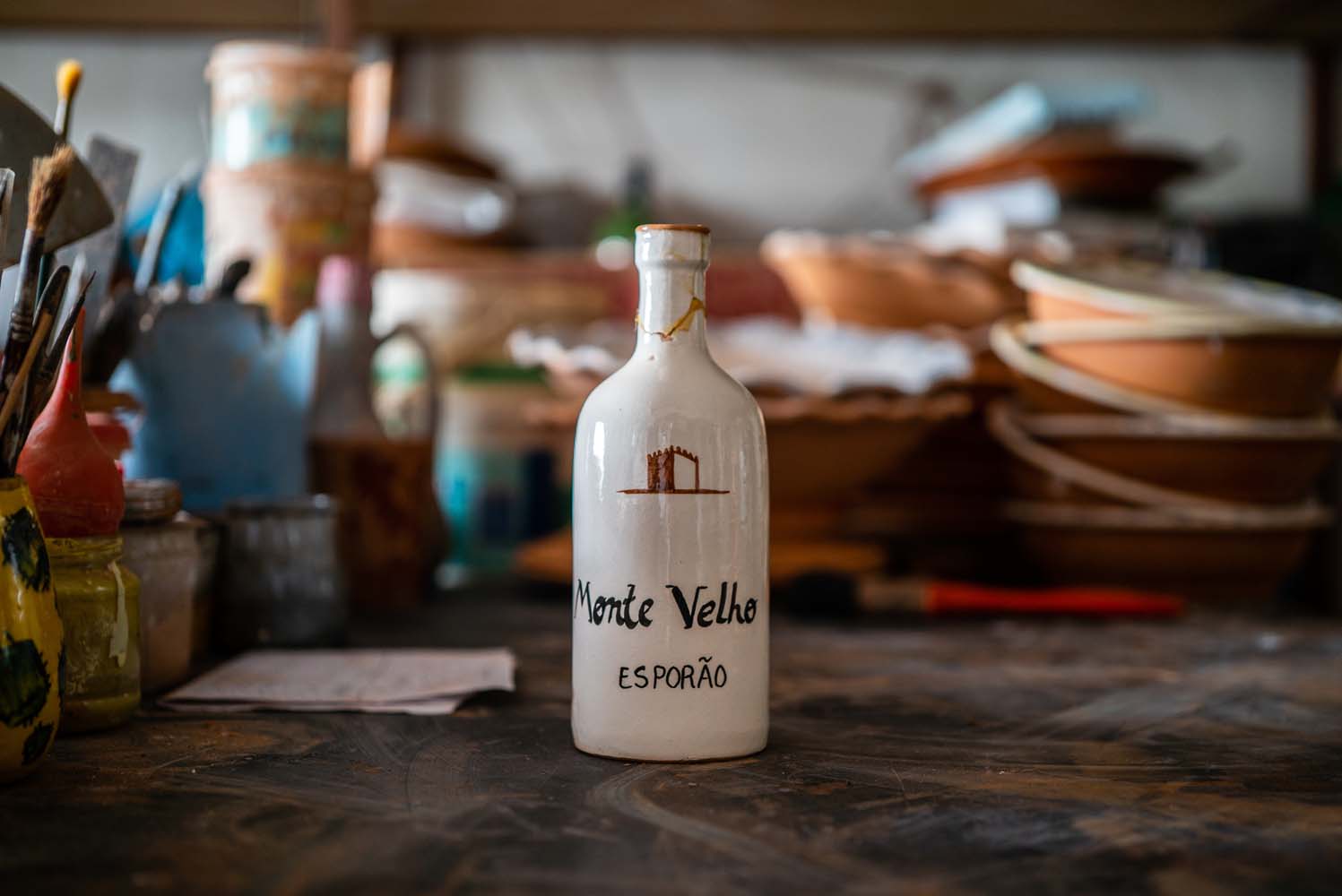 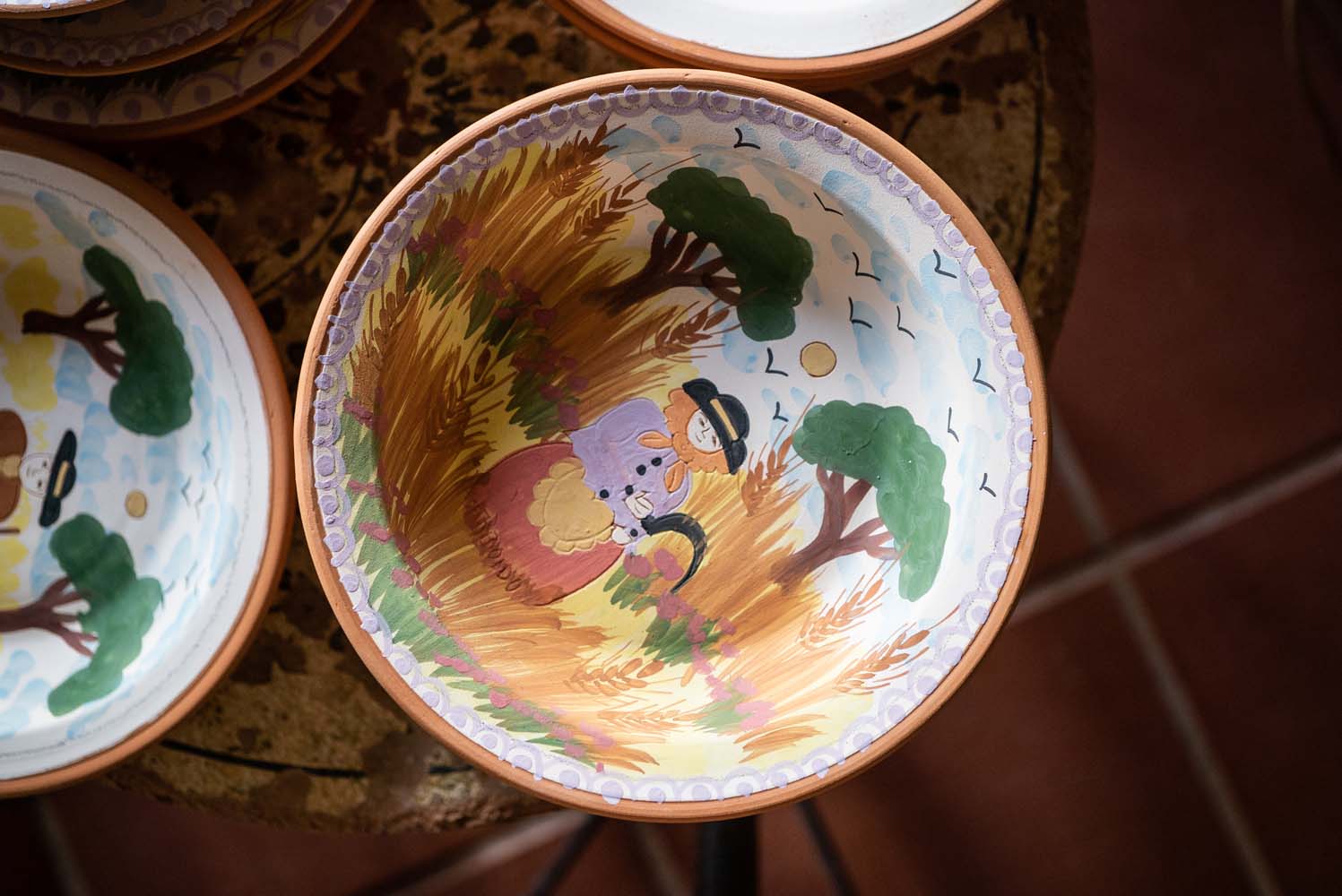 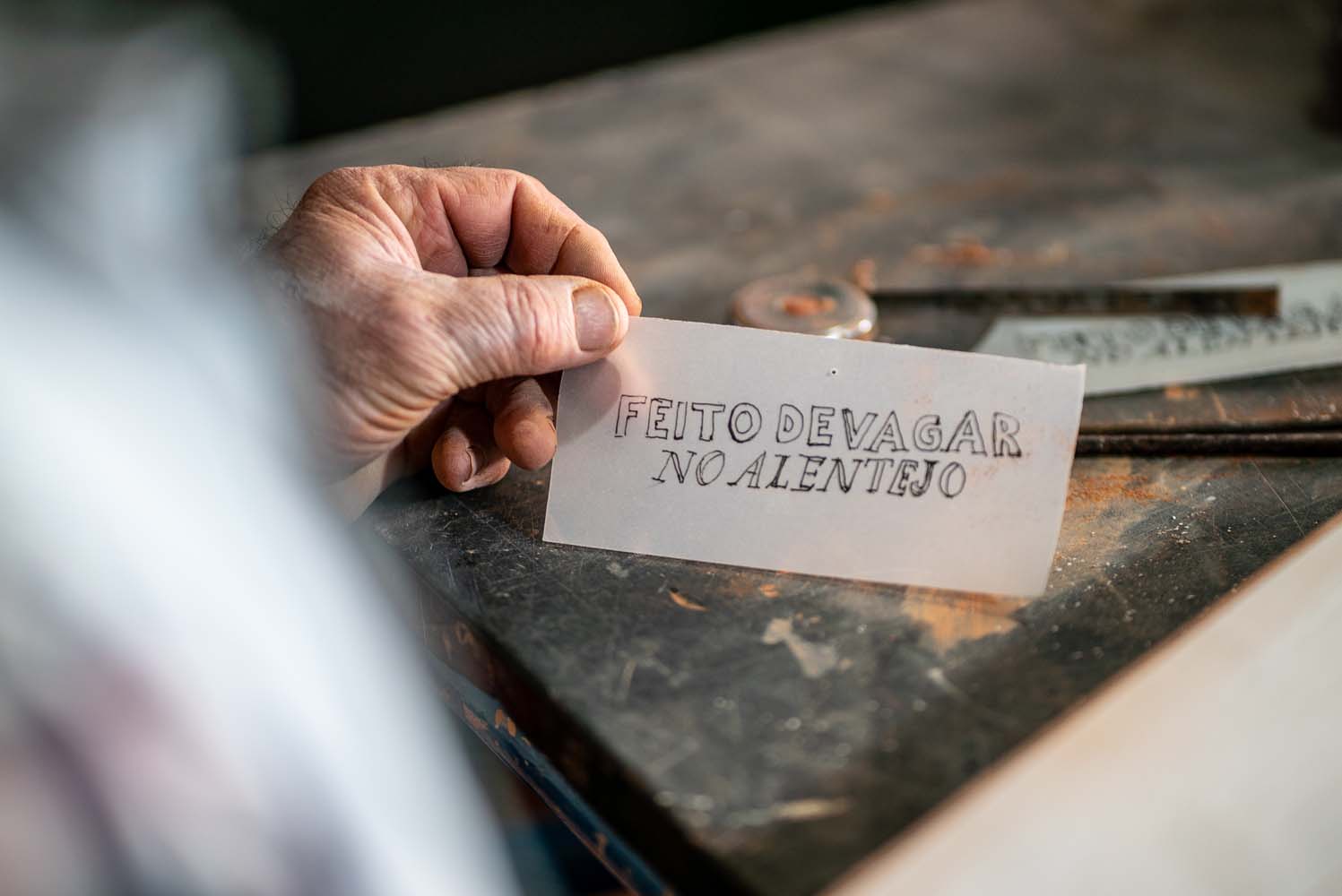 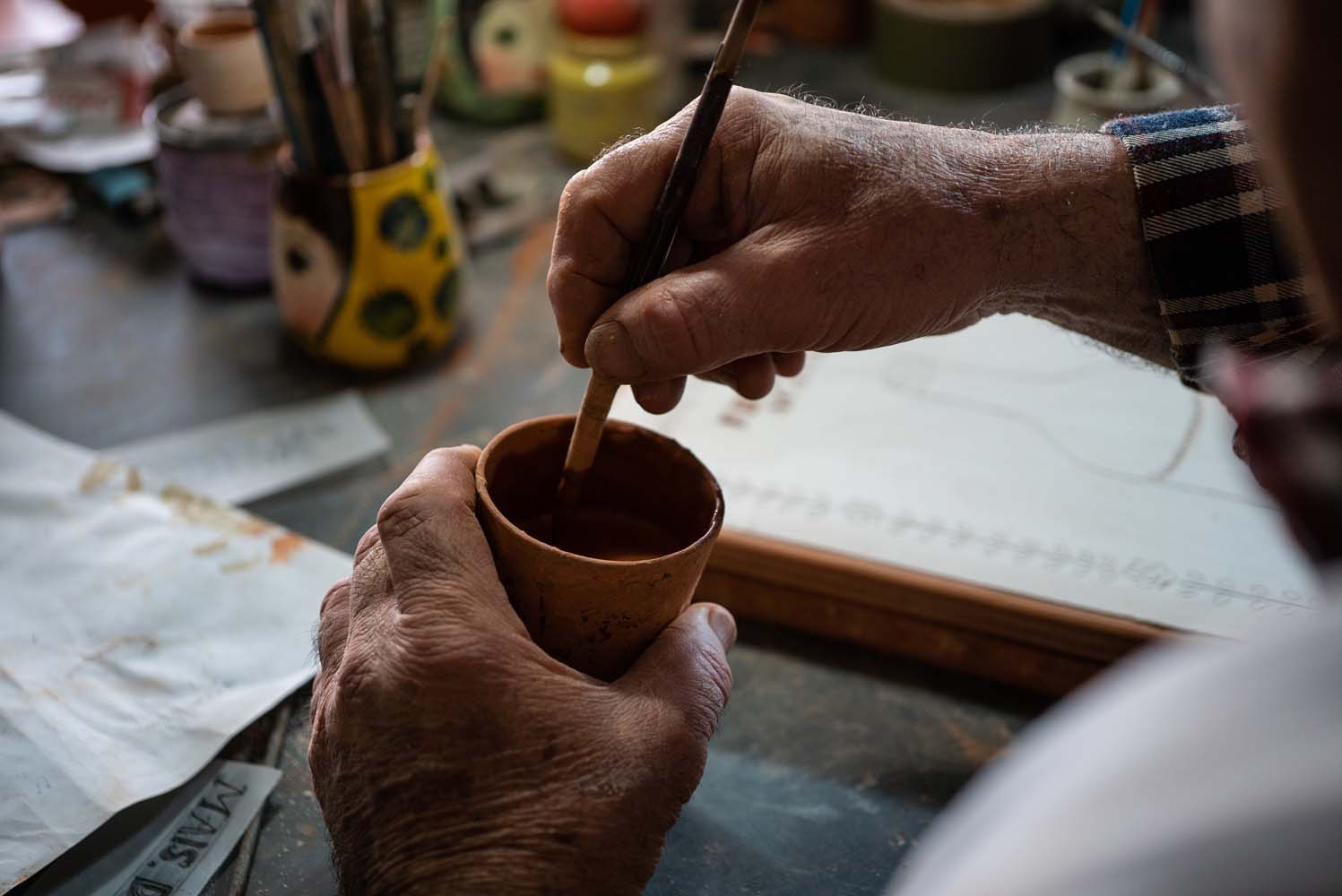 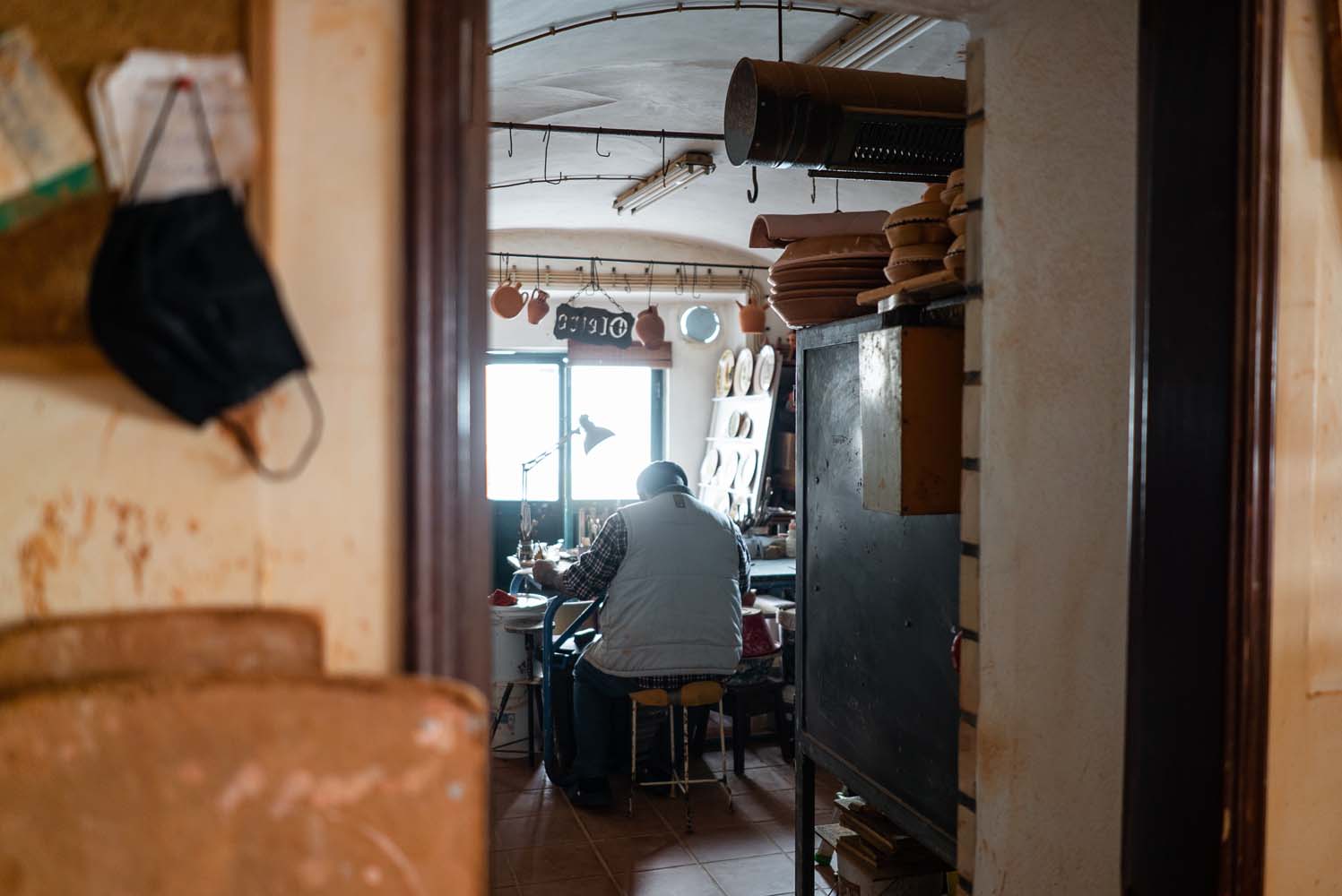