Arraiolos rugs have travelled from Alentejo to all over the world. Known for their traditional flower patterns, they are usually embroidered by women who have devoted their whole lives to this craft. When we think of their origin and production centre, the answer is immediately Arraiolos. It is true that little is known about their earliest origins, but it was in this Alentejo town that they became established. Now, like so many other traditions, tapestry is an endangered art. In Arraiolos, factories are closing down and you have to knock on the right door to find an artisan who still embroiders.

Pedro e a Loja is the sign on number 35, rua Actor Vale, in Lisbon. We knock on the door. As soon as it opens, this place that was a blank just moments before, fills with colour. There are rugs everywhere – on the walls, on the floor -, and an enormous bookcase full of skeins of wool in a thousand colours. At the heart of this clutter of objects, patterns and colours, Emília Cristina appears, welcoming us as if she knows us. 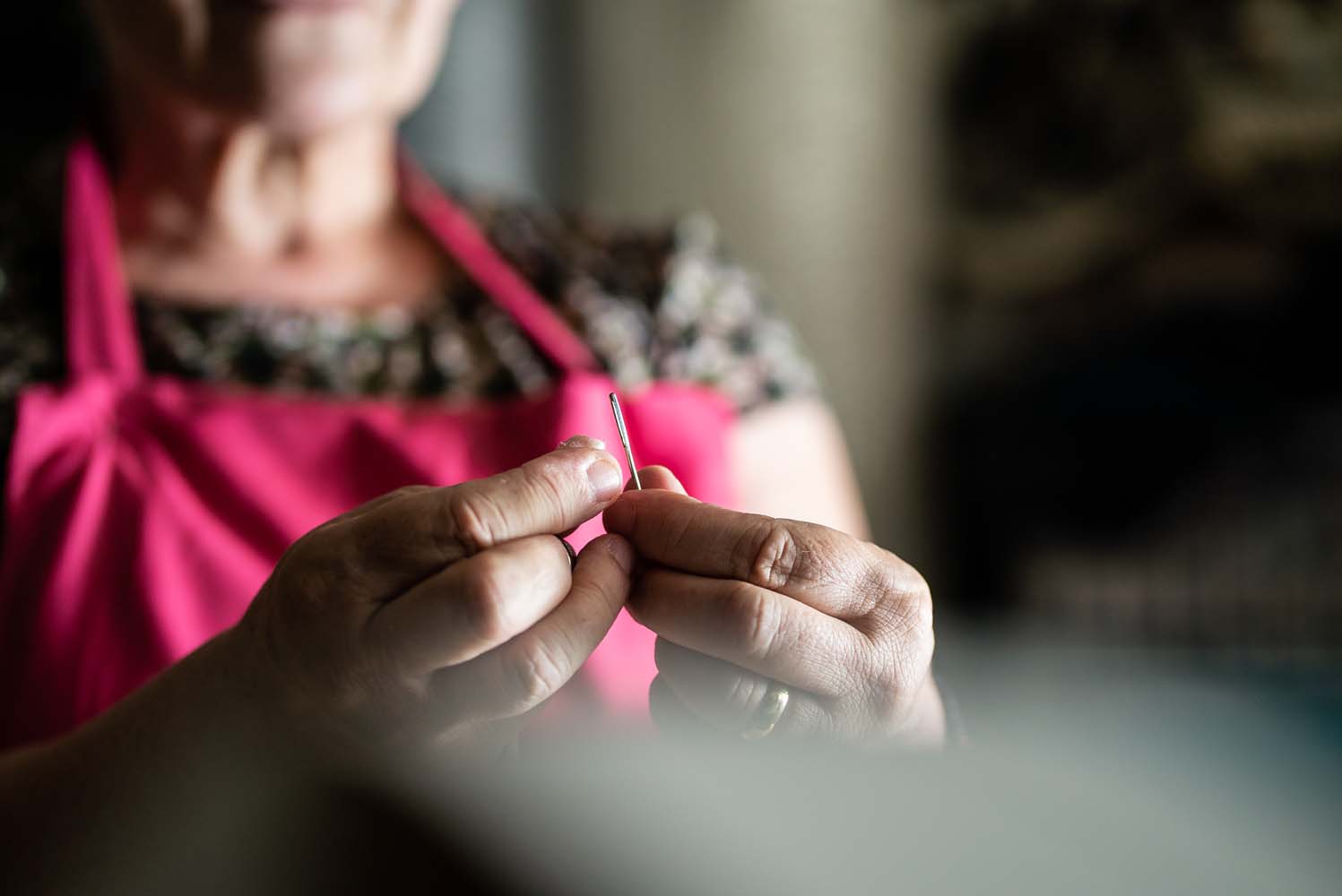 “You know, I wish I had been born in Alentejo”. This was one of the first things she told us, and we seized the opportunity to find out how someone born and bred in Lisbon ended up dedicating her life to Arraiolos rugs. “I discovered the Arraiolos technique in high school. In sewing class I chose this option because I already knew how to do all the others – knitting, crochet and embroidery”. The rug she began making at school was never finished because she didn’t identify with the colours and design, but the learning stayed with her.

Life went on with a “normal” job in a large company, while she did some knitting and crochet at home. It was in the 1980s, when people started removing carpets from their homes and using acrylic wax and varnish on their floors, that she rediscovered Arraiolos rugs. “A colleague asked me if I knew how to make these rugs and I said yes. She wanted me to make her one, but I decided to teach her instead. To make a long story short: I ended up finishing the rug. After this, more colleagues started to ask… and the next thing I knew, I had work for the next three years. I left the company and focused on rugs”.

The shop where she bought materials also started asking her for restorations, cleaning, new fringes, among other things. “I began to work with the shop. So much that, a few year later, I was in charge of the space and the customer base”. 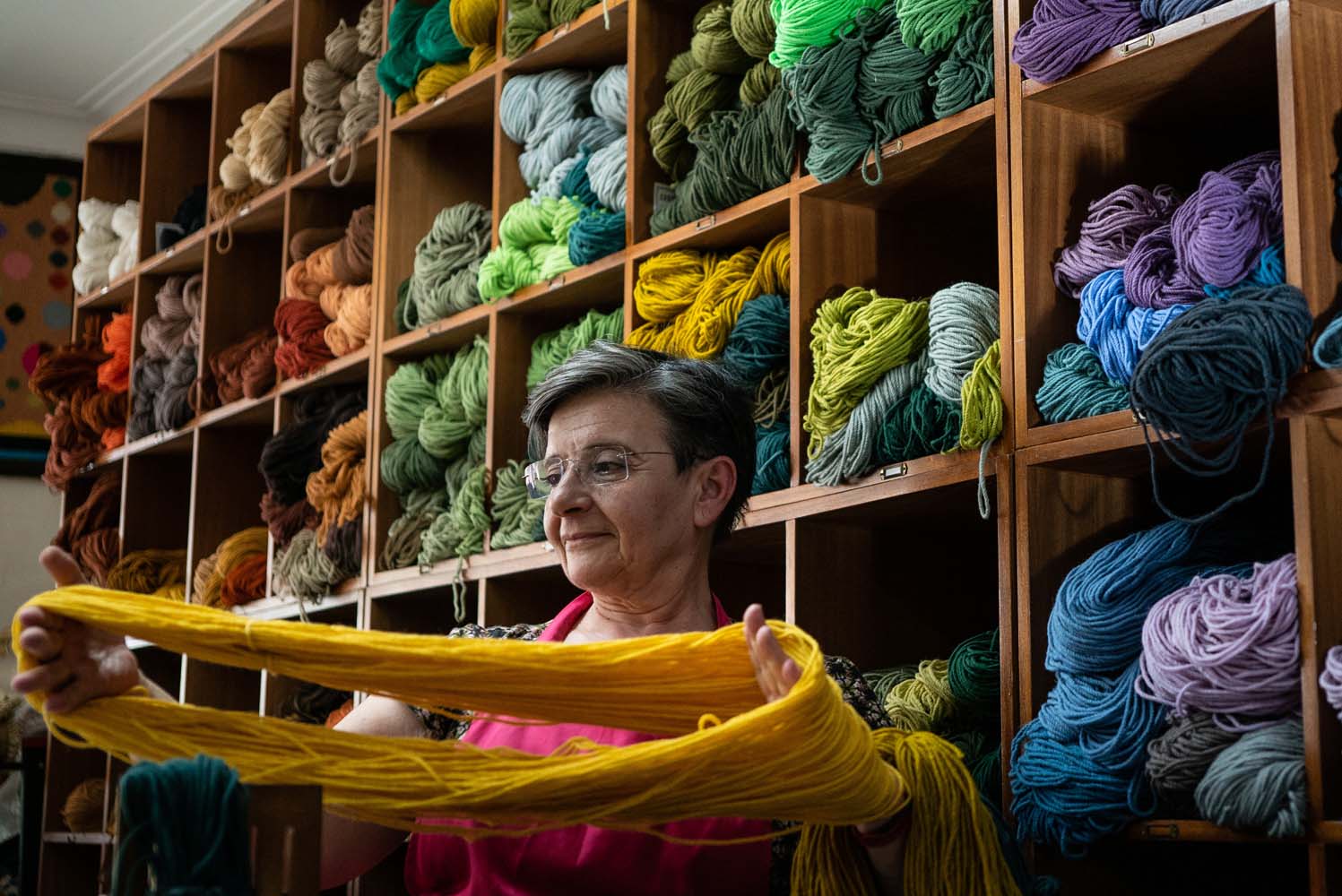 And, as in everything, a satisfied customer spreads the word. The quality and consistency of her work built the loyalty of those who sought her, and made the business grow. Today, entire families and their friends come to her not only for restorations, but also for different projects. “I make new from old. And I make special rugs, in sizes and colours that aren’t found in classic rugs. If someone wants a copy from a photograph, a landscape or something very specific, I make it”.

Dona Emília does her part to preserve and value Arraiolos rugs. She devotes her days to this craft and sharing it with others. “Everything changed in the last 20 years, and perhaps the mindset for Arraiolos rugs needs to change. The technique must keep up with the times, it can’t just stay stuck in the past. We can modernise these rugs”. 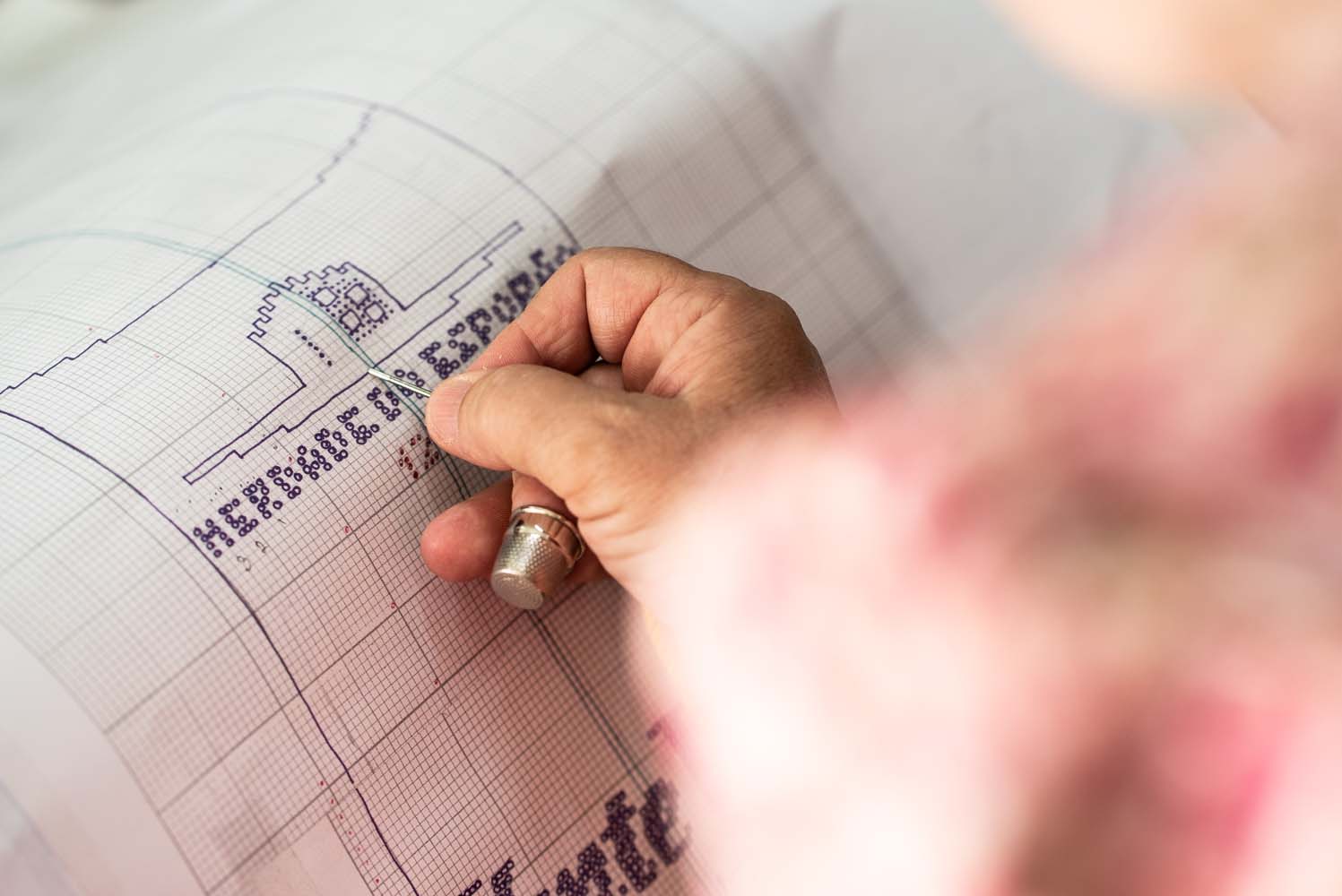 We challenged Dona Emília to make two rugs that illustrated the Monte Velho red and white wine bottles. She was immediately excited about the project. “Collaborations like this help disseminate the craft. A rug this size, which will be shown in various places, lets us share a new life of Arraiolos with people”.

We quickly realised that several months of work lay ahead. The execution begins long before the embroidery. Finding the right image, the right colours, defining sizes and enlarging the design so that everything is in proportion. After that, all in all, it was about 500 hours of embroidery. “160 grams of wool take about eleven hours to embroider; tapestry is a manual craft, made stitch by stitch. The pace depends on the hands that create it. It can’t be rushed, like wine”. The greatest proof of this is that, at this very moment, Dona Emília is probably still embroidering the rug for Monte Velho red. 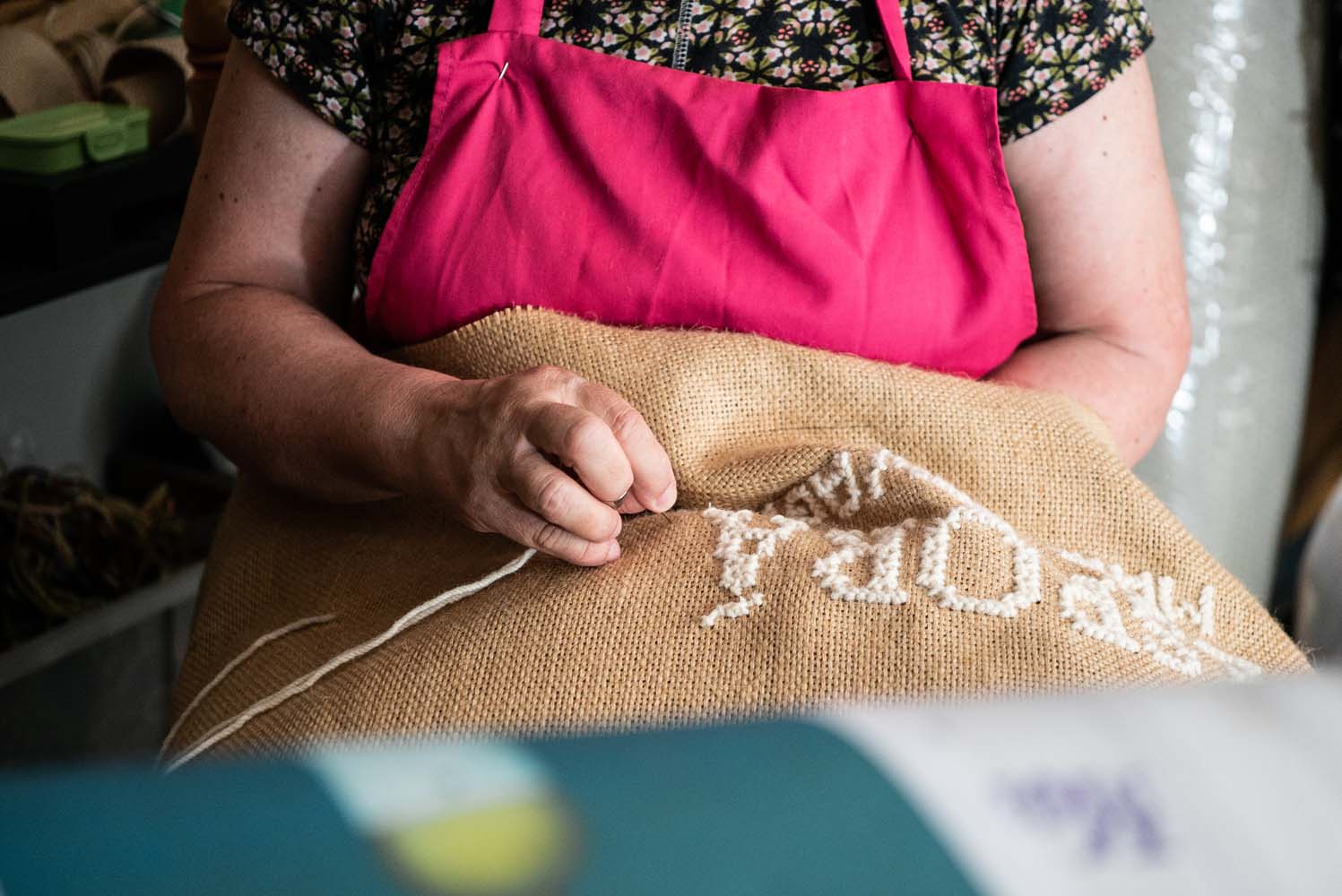 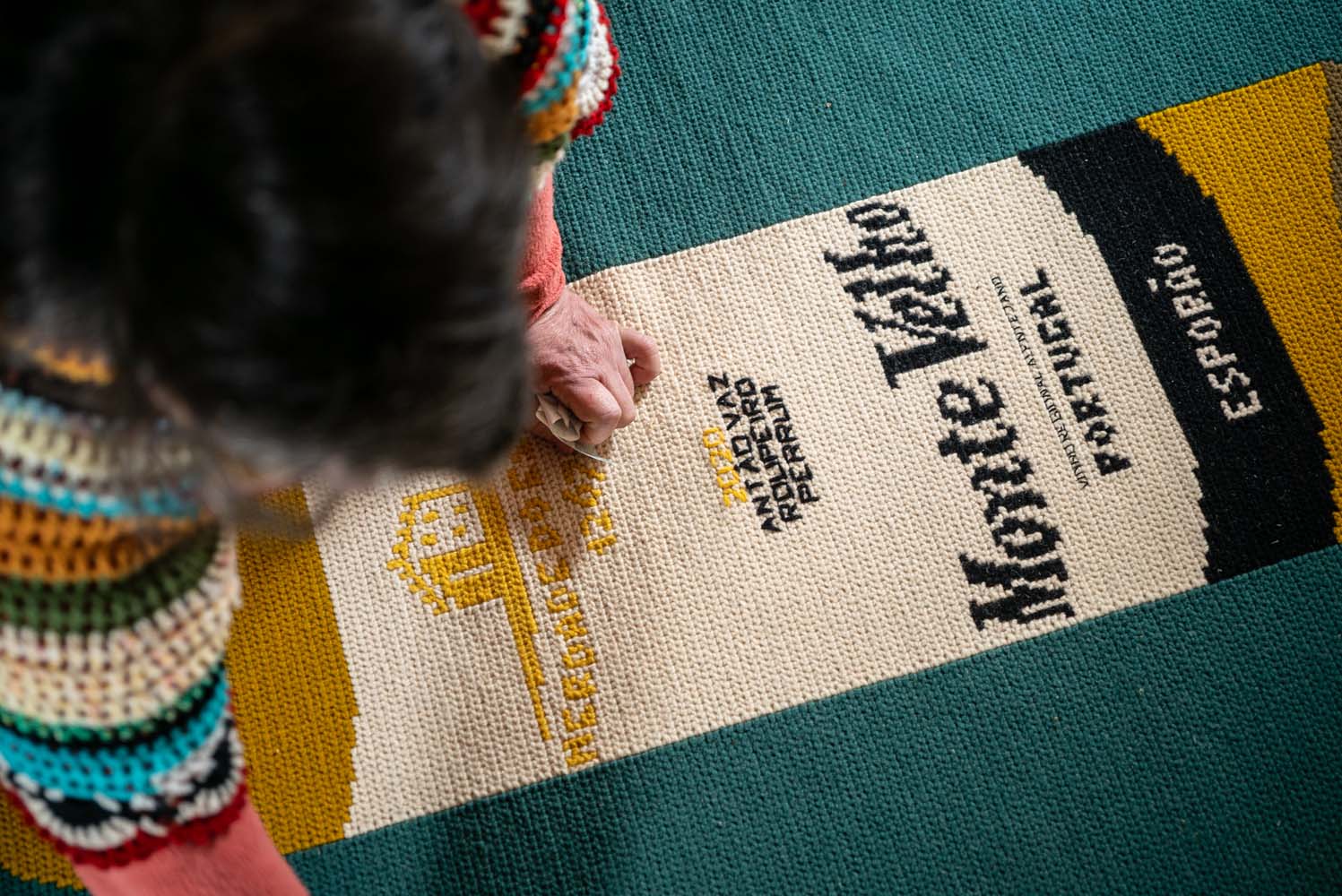 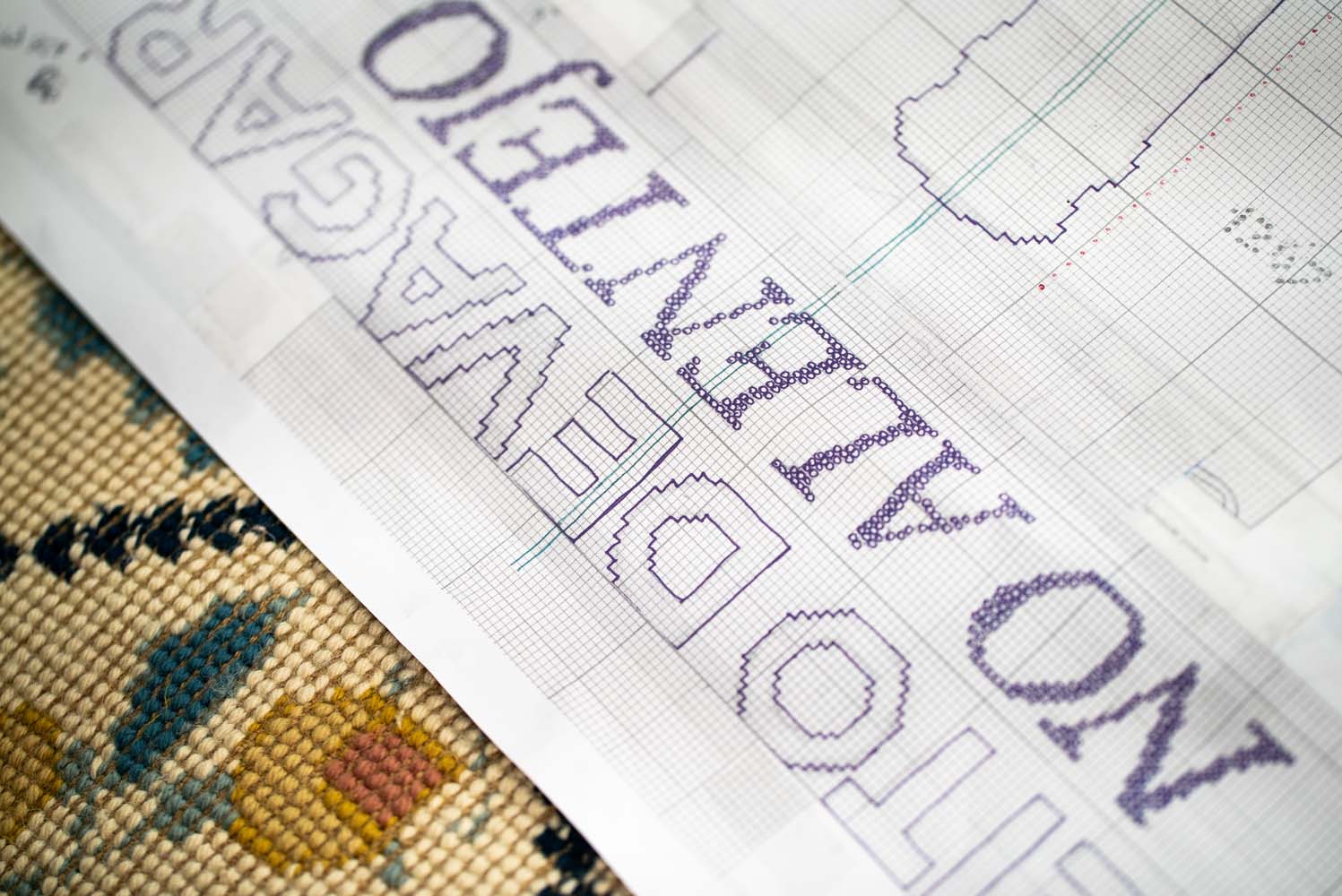 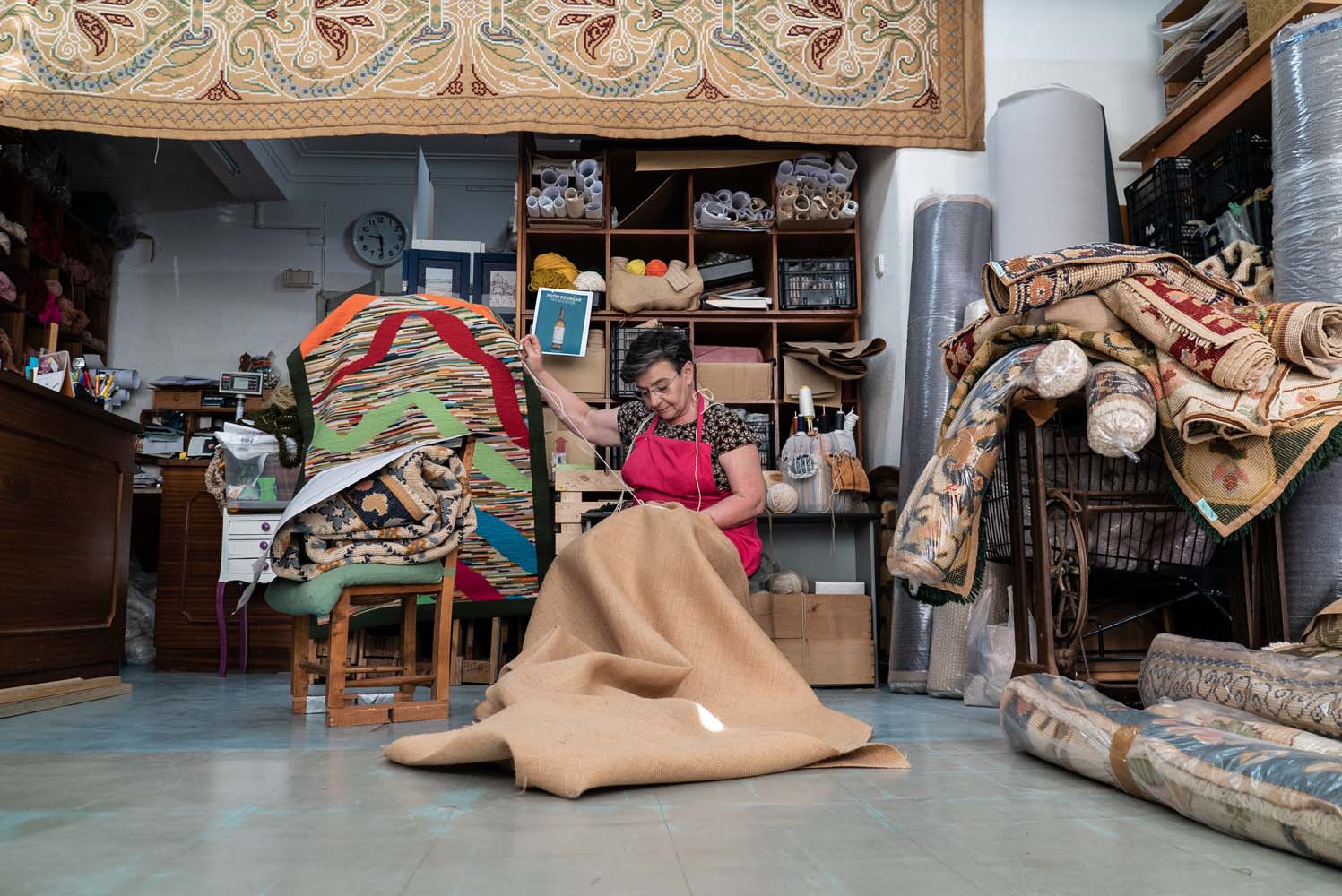 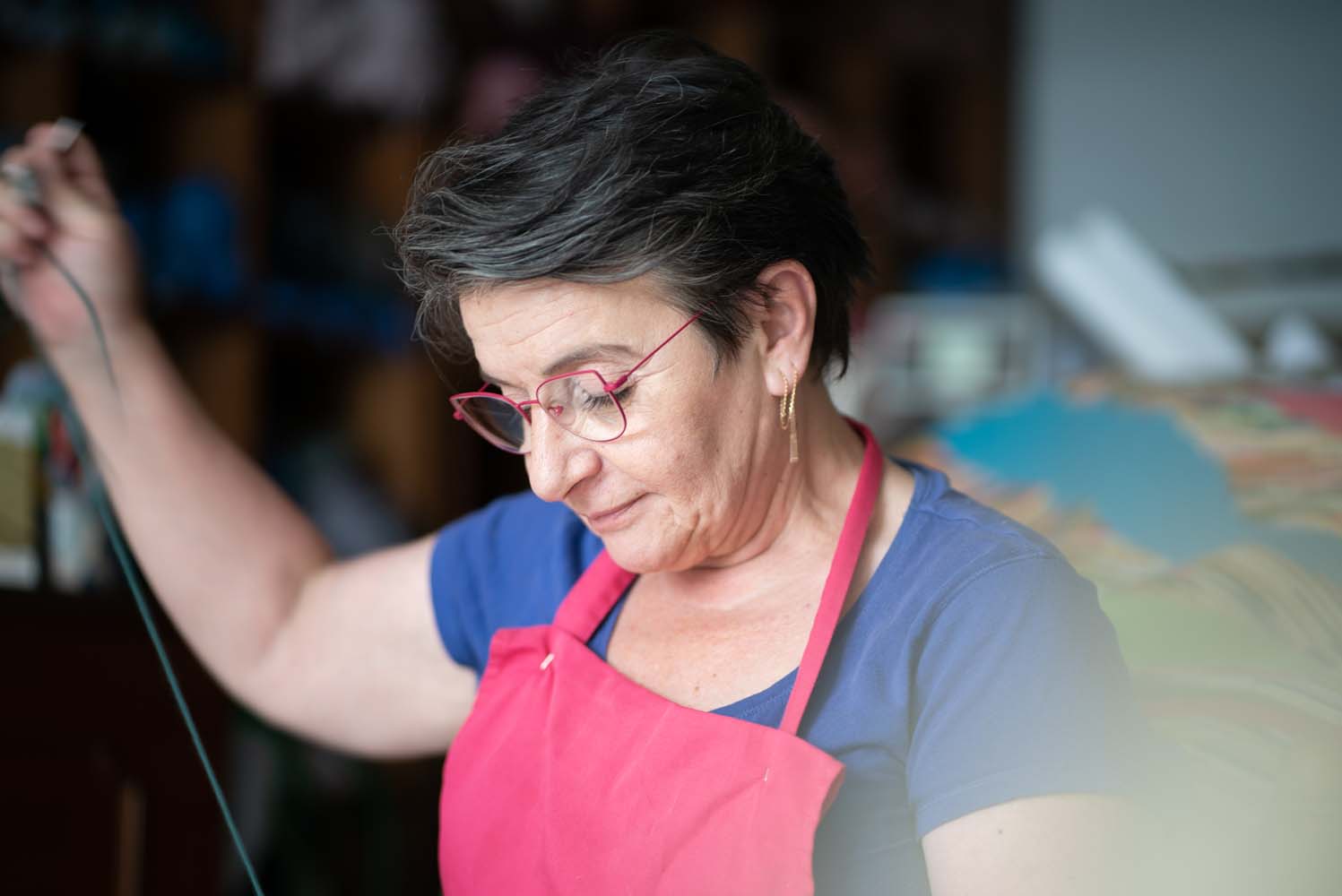 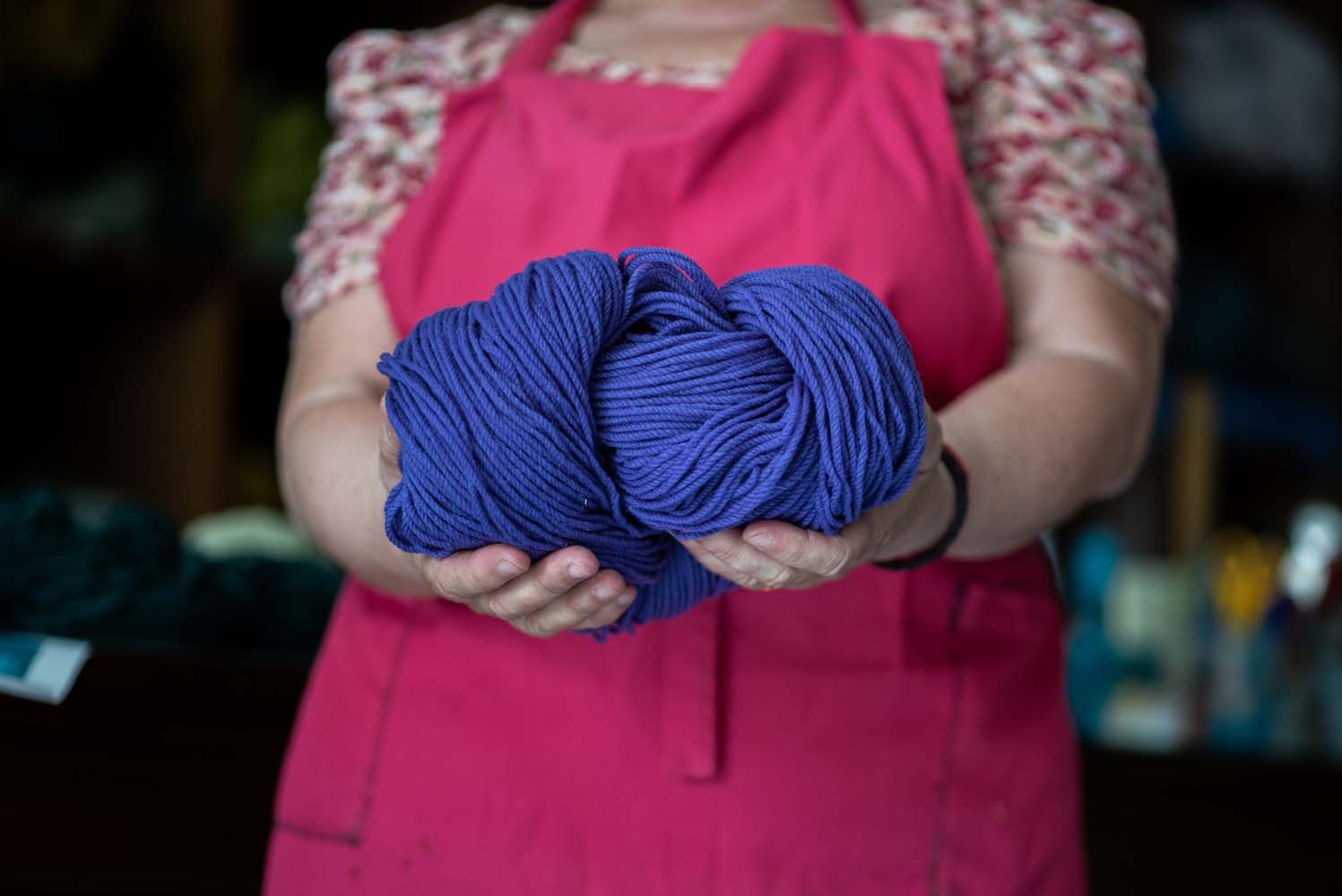 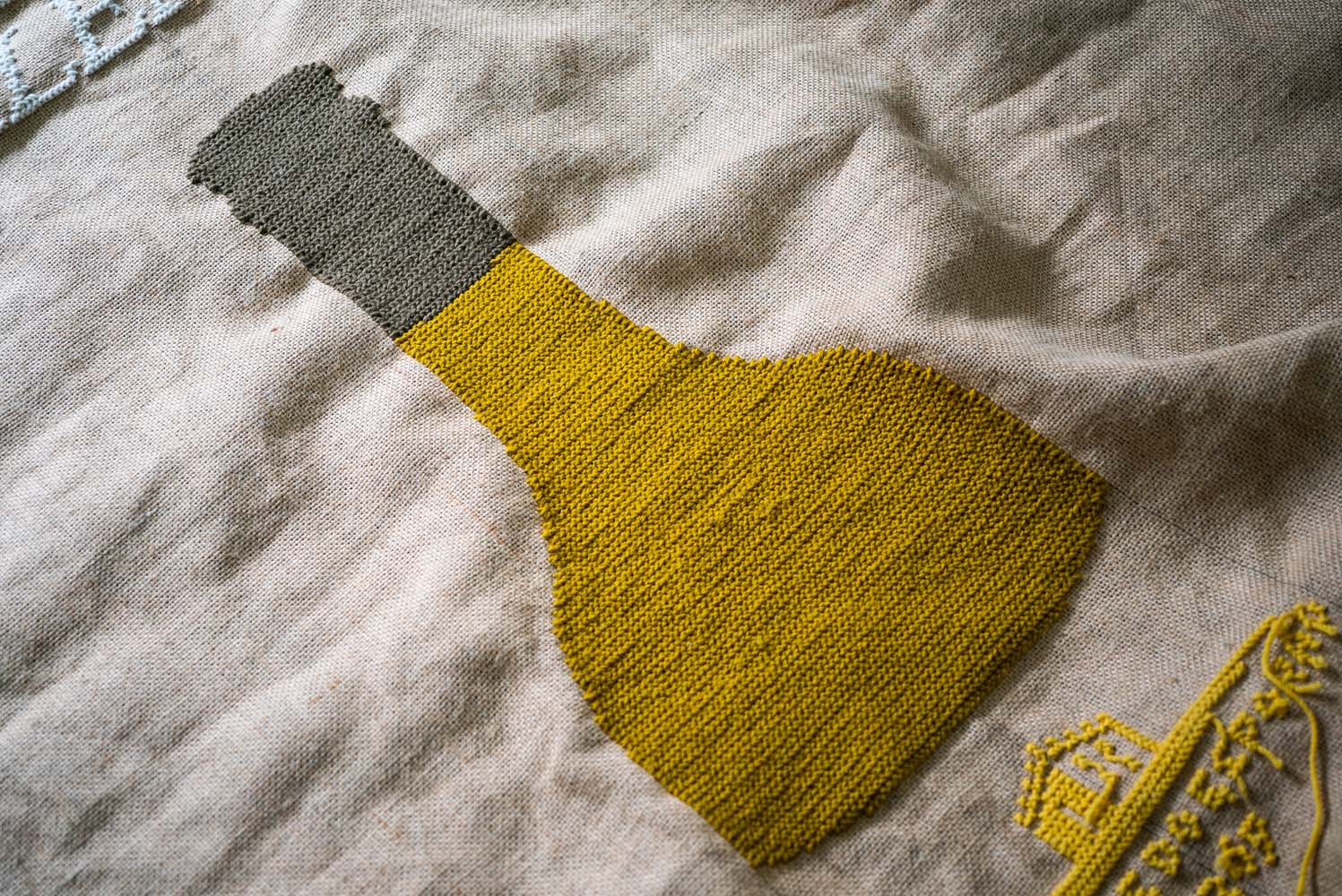